About the Marathon Competition 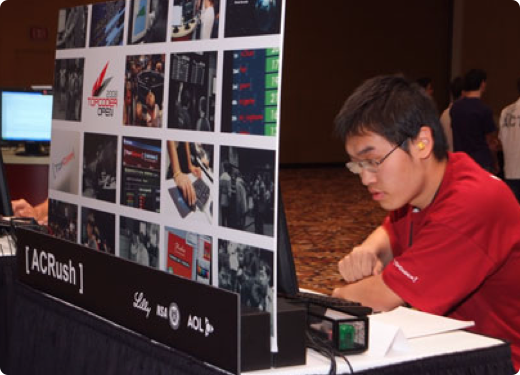 As part of the 2008 TopCoder Open, the Marathon Competition provides a more flexible format with an extended timeline that offers different types of problems than what can be offered in the Algorithm Competition. Competitors may submit code in the following languages: Java, C++, C#, VB.NET and Python.

After three rounds of elimination, we will narrow the field down to the top twelve finalists from around the world to attend the Championship Round in Las Vegas, Nevada, USA, May 11 - May 15, 2008.

No purchase necessary to enter or win. Void where prohibited.

Overview of the Tournament

The 2008 TopCoder Open Marathon Match Competition (“Competition”) will take place between January 14, 2008 and May 15, 2008 and is part of the 2008 TopCoder Open (“Tournament”). It will consist of three (3) online elimination rounds and one (1) onsite final round. The prize purse of the Competition is $25,000. Up to twelve (12) competitors will win a cash prize, and up to 100 competitors will win a participatory prize for competing in online round 3. The top 12 competitors, as determined by the online rounds, will advance to the onsite Championship round at the Mirage Hotel and Casino in Las Vegas, Nevada, USA on May 12, 2008.

TopCoder members meeting the following criteria are eligible to compete in the Competition:

In the event that a competitor is disqualified from any round, no other competitors will be added in his/her place. Except as may otherwise be set forth herein, the only exception to this is advancement to the Championship Round. In such a case, the competitor will be replaced with the competitor with the next highest score for Online Round 3.

Competitors must register for each round separately on the TopCoder web site. All start times will be communicated as Eastern Standard Time (UTC/GMT -5). If a competitor does not participate, for any reason, in an online round to which he/she has advanced, it will be treated as an automatic loss in that round of competition.

Competitors will be assigned a seed for the Competition based on their Marathon rating prior to Online Round 1.

The dates and times of the online rounds of the Competition are as follows:

Scoring and Advancing during Online Rounds

All eligible competitors who have registered for the Competition may compete, and up to the 300 highest scoring will advance to Online Round 2.

NOTE: In the event of a tie for any advancing position during the Online Rounds, the tie will be resolved in the following manner:

The format of these competition rounds is similar to standard TopCoder Marathon Matches held outside the Tournament. The rules in place for such competitions as of January 30, 2008, as may be amended by these rules or the rules for the Tournament, will apply to the online and onsite rounds of the Competition.

Each online and onsite round of competition consists of two phases: the Coding Phase and the System Testing Phase.

The twelve (12) competitors who advance from Online Round 3 will travel to the Mirage Hotel and Casino in Las Vegas, Nevada, USA, to compete in the Championship round of the Competition on Monday, May 12, 2008. All onsite competitors must arrive at the Mirage no later than 5:00 PM PDT on Sunday, May 11, 2008.

All competitors must confirm their attendance at the onsite Championship no later than 5:00 PM EDT (UTC/GMT -4) on Wednesday, March 26, 2008, and must have acquired any necessary travel visas and know for certain that they can travel to the United States. If a competitor is required to travel from outside the United States, it is necessary for the competitor to show proof of a visa and/or passport by 5:00 PM EDT (UTC/GMT -4) on Wednesday, March 26, 2008. Competitors may email a copy of their documents to Jessie D’Amato Ford. Competitors who fail to meet this requirement will be replaced as an onsite finalist.

TopCoder will provide air travel arrangements for each competitor. The flight will be reserved by and paid for by TopCoder and will be for arrival on May 11, 2008 and departure on May 15, 16 or 17, 2008, whichever is most cost-effective. At TopCoder’s sole discretion, TopCoder will pay for each competitor’s airfare up to $1,500, but reserves the right to make exceptions to the maximum amount based on individual circumstances. If a competitor wishes to take a flight other than the one provided by TopCoder and/or wishes to stay at a hotel other than the one provided by TopCoder, or wishes to stay additional nights at the Mirage or another hotel, the competitor shall be responsible for the entire cost of such deviation from the accommodations and travel arrangements provided by TopCoder. In addition, competitor agrees to reimburse TopCoder for any costs, penalties, fins or fees incurred by TopCoder as a result of such deviation.

Competitors must not cheat. All ideas for code and/or challenge submitted must be the competitor’s alone. TopCoder uses the word “cheat” to mean collaboration of any sort - including, but not limited to, working with another competitor, submitting code that was not fully authored by you, and using resources, software, etc. that are not allowed in TopCoder competitions, the Competition or the Tournament. TopCoder reserves the right, in its sole discretion, to remove any competitor from the Tournament and/or the Competition who it suspects of cheating.

All decisions relating to the viability of submissions, the ranking of submissions and all other matters pertaining to the Tournament or the Competition are within the sole discretion of TopCoder or its designee and are final and binding in all respects.

All competitors who advance to the onsite Championship Round must complete the following items and submit them to TopCoder by 5:00 PM EDT on Wednesday, March 26, 2008:

A competitor who fails to submit the above items on time will not advance to the onsite round and will be replaced by the competitor with the next highest score after Online Round 3.

Except as otherwise provided in these rules, all prizes will be sent within 60 days of the completion of the Championship Round. Prizes which remain unclaimed or undeliverable after a period of six (6) months will be forfeited. Competitors who do not submit the required information listed above by the applicable deadlines forfeit their prizes.

As a condition of winning and redeeming a cash prize, certain competitors will be required to submit a completed (i) Competitor Questionnaire, (ii) Affidavit of Eligibility and Liability and Publicity Release, (iii) IRS Form W-9 or W-8BEN, as appropriate if one is not already on file with TopCoder, and (iv) Travel Form. In completing the Affidavit of Eligibility and Liability and Publicity Release, a competitor who wins a cash prize (a) confirms his/her eligibility, (b) represents and warrants that he/she has not cheated, © verifies the accuracy of the information in the TopCoder member database, (d) authorizes TopCoder to publicize the results of the Competition, (e) agrees to sign any applicable forms required by tax authorities, (f) licenses all rights to information submitted during the Competition (including rights to source code and other executables) to TopCoder, and (g) releases TopCoder from liability arising out of any prize won.

TopCoder requires competitors to complete the Form W-9 or W-8BEN for tax reporting purposes. A Competitor will be disqualified for providing false information in the registration process or in any required form.

By participating in the Tournament and the Competition and redeeming a prize, a competitor releases and agrees to hold harmless TopCoder, its affiliates, subsidiaries, advertising and promotion agencies, sponsors, and prize suppliers, and all of their respective directors, officers, employees, representatives and agents, from and against any and all liability for any loss, property damage or damage to person, including without limitation, death and injury, due in whole or in part, directly or indirectly, from or arising out of participation in the Tournament and/or the Competition, or participation in any Tournament or Competition-related activity, or the receipt, use or misuse of a prize. TopCoder specifically disclaims all liability associated with, and makes no warranties with regard to, any prize given.

In addition, all competitors who win a prize agree to cooperate with TopCoder’s publicity efforts, without further compensation. This includes the agreement to use their name, handle, address (city and state) and likeness for publicity purposes, where legal, for this or similar events in the future, and to use the statements made by, or attributed to, the competitors relating to TopCoder and any and all rights to said use, without further compensation. Furthermore, all competitors agree to promptly notify TopCoder if a third-party, including any Tournament and/or Competition sponsor, contacts the competitor regarding employment opportunities and/or media interest as a result of the competitor’s participation in the Tournament and/or the Competition.

TopCoder reserves the right, in its sole discretion, to revoke any and all privileges associated with competing in the Tournament and/or the Competition, and to take any other action it deems appropriate, for no reason or any reason whatsoever, including if TopCoder suspects competitors of cheating, tampering with the entry process, the operation of the Web site, or the Competition, or otherwise being in violation of the rules. TopCoder reserves the right to cancel, terminate or modify the Tournament and/or the Competition if it is not capable of completion as planned for any reason, including infection by computer virus, bugs, tampering, unauthorized intervention or technical failures of any sort, or for any other reason.

The Tournament and the Competition is void in whole or in part where prohibited by law.

A list of winners in the Competition by handle will be available on the web site at http://www.topcoder.com/tc, and will be displayed for at least 3 months after the completion of the Competition.

The Tournament and Competition are brought to you by TopCoder, Inc. (http://www.topcoder.com/) 95 Glastonbury Boulevard, Glastonbury, CT 06033.